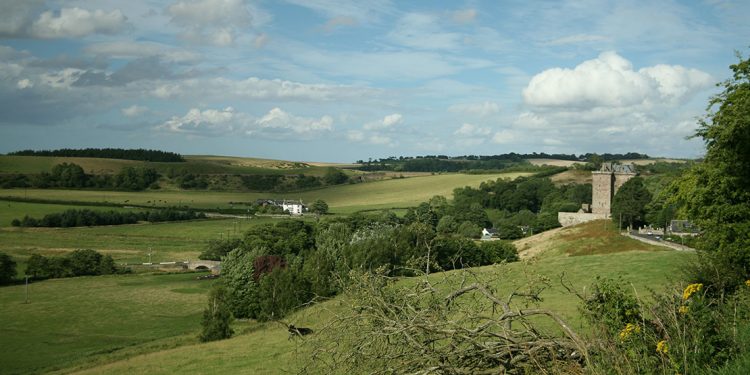 Borthwick Castle sits atop a knoll in the tiny village of North Middleton, on the edge of Scotland's beautiful Borders region.
Photo Credit: Getty Images

My husband and I spent our honeymoon in a 550-year-old Scottish castle. Located 12 miles south of Edinburgh, Scotland, Borthwick Castle doesn’t look like the typical multi-turreted, fairytale castle of one’s imagination. To be sure, the two majestic towers rising nearly 100 feet inspire and overfill one’s frame of vision while driving under the simple, elegant stone archway. And the still visible battle scars dating from the time when Oliver Cromwell and his Roundheads besieged the castle in 1650 more than hint at its history and authenticity.

Yet, from the nondescript, gravel-filled parking lot to the simple stone twin towers, first impressions of Borthwick belie what truly awaits visitors: a genuine, captivating castle.

Borthwick Castle sits atop a knoll in the tiny village of North Middleton, on the edge of Scotland’s beautiful Borders region. Verdant rolling hills dotted with cows, sheep and heather surround the castle, which is at center stage. Built in 1430 by the first Lord Borthwick, whose tomb is visible in the village church, the castle has been welcoming overnight guests for over 550 years.

In fact, one of its most famous guests was the ill-fated Mary Queen of Scots, first cousin to England’s Queen Elizabeth I. Along with her third husband, the Earl of Bothwell, Mary spent her honeymoon at Borthwick in 1567. The couple also used the castle as a sanctuary from persecution and spent their final days together before being tragically separated forever.

One of the rumors swirling around the castle is that Mary’s ghost can be seen occasionally, wandering the stairwell near her honeymoon bedchamber, which incidentally, is called the Mary Queen of Scots room. Although this room wasn’t available for our own honeymoon sojourn, which is probably a good thing given the fate of its illustrious guests, the Sinclair room was. Located in the same tower as the Mary Queen of Scots bedchamber, the Sinclair is only one of Borthwick’s ten rooms. Five rooms are in one castle, three in the other, and two located in the rounded Gatehouse tower, which is situated just outside the main castle.

Only 12 feet separate the towers. Legend has it that prisoners sent to the castle were sometimes given the chance to win their freedom if they were able to jump from the roof of one tower to the other. Apparently those prisoners convicted of truly despicable crimes had to do so with their hands tied behind their backs. Those that didn’t make it faced not only a 100-foot drop, but also spikes arranged strategically on the ground.

The Sinclair room is situated just a few steps down from the roof. One impromptu exploration took us to the door leading to the roof, but, alas, the door was locked. Though we didn’t make it to the roof, the view from our windows—cut directly out of the castle’s stone—was spectacular enough.

After climbing the spiral stone staircase’s 76 steps, my husband and I would arrive at the door to our room, which was unlike any hotel room door we’d ever seen. Ranging from four to five-feet high and with wrought iron bars, most of the castle’s arched wooden doors are the 550-year-old originals.

The castle is not only a fully functional hotel, but is a restaurant as well. 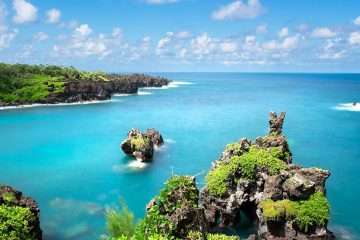 Touring the Hawaiian Back Roads of Valley Isle from Wailuku to Kahakuloa to Wailea This trip, we’re going for it. This time, there are no road restrictions on...

We dined one evening in the Minstrel’s Gallery, which overlooks the main dining area of the Great Hall. The Hall is a striking room with a grand chandelier, massive fireplace, and is filled with authentic knights in shining armor—minus the actual knights. That evening, the Hall had been booked by a group of German bankers on an annual retreat. We listened and snuck occasional glances below us as the 12 people seated around the grand dining table made rousing speeches and occasionally banged their fists on the table.

Though at first, we were disappointed with our seating arrangement because we felt so isolated, we soon were swept away by the intrigue of the events below, the romantic setting of just the two of us, and the glorious views of the bright green moors. Our meal of typical Scottish fare was a four-course set menu and included pheasant, roasted potatoes and warm goat cheese. Though the food was good, the service was more impressive, as the courteous and skilled staff attended to us as if we were royalty. The irony of having this experience while being seated in the Minstrel’s Gallery was not lost on us.

Borthwick Castle is available to hotel guests from mid-March to early January. In addition to providing visitors with an unforgettable experience, the castle can arrange activities such as archery, fishing, golf, and horseback riding. 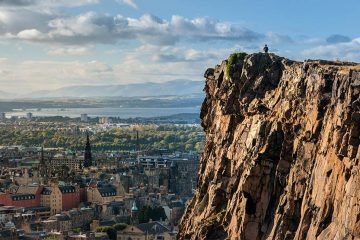 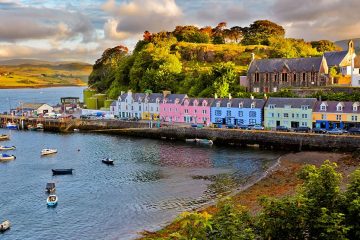 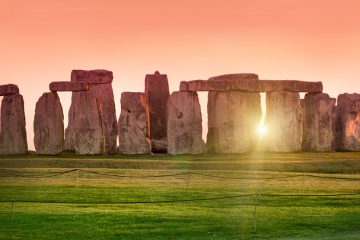