Panic at the Airport

After more than five years of hopping around the world, I thought I was pretty travel savvy. Despite having been on countless flights across the globe, though, and thinking I had heard it all when it came to tips for flying, I still wasn’t prepared for the complete shock that waited for me at the check-in desk the last time I went to get on a plane.

I was nearly denied boarding because I had only booked a one-way ticket to Africa.

Here’s what happened (and how you can avoid making my mistake!).

I was flying from New Zealand to Tanzania to start a job with an NGO. My new employers had given me detailed instructions on how to get a business visa on arrival in Dar es Salaam, so I was confidently armed with a letter of employment, my yellow fever vaccination certificate, and my one-way ticket as I marched up to the check-in desk.

I almost made it through. The woman behind the check-in counter printed my boarding passes and put tags on my luggage, before hesitating and double-checking something in her computer. Then, she called over a supervisor.

They conferred for a few moments, and then turned twin frowns to me. They asked me if I had proof of onward travel and I explained that I was moving to Tanzania so no, I didn’t. They then informed me that I might not be allowed entry because of my one-way flight, so I would need to show them an onward flight ticket in order to be allowed to board the plane.

I stood there in shock, a sick feeling creeping up through my belly.

I tried arguing, waving around the letter giving details of my employment and trying to convince them I would be getting a business visa on arrival. I tried begging, telling them I couldn’t afford another flight and it would ruin everything to miss this one. I thought briefly about lying and trying to bluff my way through by saying I had a flight, but by that point I knew it was far too late.

So, I ran to the Flight Center in the airport and tried frantically to book a flight. It really wasn’t my day though, because all of their systems were down and there wasn’t time to issue a ticket in the 20-minute window I had left before the plane closed its doors and took off without me.

By this point I was a blubbering mess, my dignity flying right out the window as soon as the very real possibility of missing my flight loomed before me.

In the end I caved, grabbed my phone, and with shaking fingers surrendered my credit card details to the airline’s website as I booked a completely random flight from Dar es Salaam to London. This was enough to satisfy the check-in team and they rushed me through the fast lane at immigration and security, ushering me onto the flight seconds before the door slammed shut.

I made the flight, and I learned a lesson I’ll never forget. Don’t do what I did: make sure you know about possible one-way ticket international flight problems before you travel. 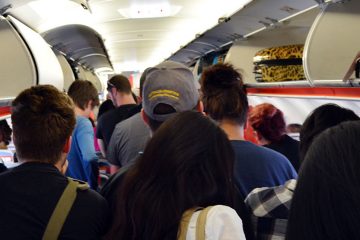 These Are Your Rights When Your Flight Gets Canceled, Delayed or Overbooked

When your flight gets canceled, delayed or overbooked do you know what your air passenger rights are? We outline the compensations you're owed.

If there is even a small risk that you will be denied entry into your destination country as a result of being on a one-way ticket, the airline you are flying with has the right to deny you boarding. This is because they would have to take on the cost of flying you home again should you be denied entry at immigration, and they want to avoid having to give up that seat for you.

Frustratingly, this rule is inconsistently applied, so like me, you could be flying on one-way tickets for years before running into problems. It’s a big risk to book a one-way flight without a backup plan though, as you could miss your flight and have to rebook your ticket for hundreds of dollars.

It’s best to save yourself the trouble and be a little cautious.

How to Get Around One-Way Ticket Problems

If you’re going somewhere for an indefinite length of time, are moving abroad, or are planning on traveling overland and don’t want or need a return ticket, you have several options to get around any issues.

The main thing to remember is to avoid my mistake and look into all of this BEFORE you get to the airport. To avoid any one-way international flights problems:

One last tip: always check in early so you can deal with any potential issues. That means getting to the airport about three hours before your flight — just in case!