Few children’s entertainment brands enjoy the same long-running cachet as Nickelodeon. Perhaps only Disney edges it out for cultural relevance, but The Mouse is in a league all its own. Even if Nickelodeon comes in second in that particular contest, no one would deny its impact. Just scan a list of its programming and well-known names positively leap out at you. “SpongeBob SquarePants.” “Rise of the Teenage Mutant Ninja Turtles.” “PAW Patrol.” “Peppa Pig.” “The Legend of Korra.”

Perhaps such popularity explains why a Nickelodeon-themed hotel opened in Orlando, FL in 2005, promising an entirely different experience than other resorts in The Theme Park Capital of the World. In many ways, it fulfilled that promise — but you won’t find the Nickelodeon Hotel if you look for it today.

On May 31, 2016, the hotel stopped offering all Nickelodeon-themed activities and closed on April 18, 2018, part of its rebranding back into a Holiday Inn property. What happened? Are there any other Nickelodeon properties? And what does its replacement, Holiday Inn Resort Orlando Suites, offer?

From Holiday Inn to Nickelodeon — and Back Again

In 2005, a Holiday Inn Family Suites Resort located right near Disney World got purchased. Its buyers had an audacious plan: turn the 24-acre property into a resort that would truly stand out in the Orlando market. That’s no mean feat given that more tourists pour into the area annually than in any other U.S. city. But the owners thought they had a silver bullet in the Nickelodeon brand.

After pouring $20 million into the remodeling and reimagining of a Holiday Inn property, the Nickelodeon Hotel promised an entirely different vacationing experience. Bright colors met resort diversions, and famous characters highlighted its 777 rooms.

In addition to the expected pool, the resort included a small water park with a four-story water tower. It also boasted a 400-gallon dump tank guaranteed to soak you to your bones. The Nick Hotel also featured miniature golf, basketball courts, a 50,000-square-foot entertainment facility, live game show performances, and costumed mascots styled off of favorite television characters. Oh, and there was slime — lots of that trademarked, intensely green Nickelodeon slime.

But a mere decade after its opening, the Nick Hotel announced that it would cease all Nickelodeon-themed activities. On April 18, 2018, it closed altogether. It returned soon after as a very familiar brand: a Holiday Inn resort in Orlando. After a $30 million remodeling effort, the Holiday Inn Resort Orlando Suites – Waterpark Hotel by IHG replaced it, stripping all of the Nickelodeon content from the property.

What happened? Some pundits claimed that the kid-centric network’s shows started to slump in popularity, which caused the resort’s closure. But a more likely explanation involved a new partnership between the network and Karisma Hotels. See, you can still book a room at a Nickelodeon resort. You just won’t find it in the United States.

Not long after the sale of the Orlando Nick Hotel, Nickelodeon and Karisma Hotels announced Nickelodeon Punta Cana, a luxury getaway in Eastern Dominican Republic. Indeed, “luxury” is the watchword with Nickelodeon Hotels & Resorts Punta Cana.

Visit the resort’s website, and the first thing you’ll see is a chipper SpongeBob popping up behind a booking menu. The property contains many of the same activities that appeared at the Nick Hotel. Characters will dine with you. There’s a water park and a clubhouse for children. And in addition to basketball, guests can also enjoy soccer, tennis, archery and jogging. 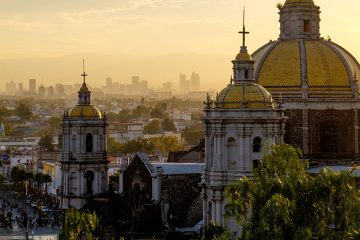 Travel to Mexico is varied and suits the tastes of every traveler, from beach-loungers to nightlife-lovers to cultural-fiends.

Yet you can quickly tell that just as much emphasis is on the traditional all-inclusive experience rather than providing a kid-friendly getaway. The website promises gourmet cuisine and premium drinks, Spanish lessons and cooking classes, island tours and honeymoon packages. The spa is “an oasis of zen on an island of fun,” and the resort’s Romance section offers anniversary incentives. You get the idea: though the Nickelodeon-related stuff is very much there, it seems more of a sideline than the primary point of the property.

Another planned resort in Riviera Maya, Mexico, looks to take a similar tack. The Nickelodeon Hotels & Resorts Riviera Maya promises that the area’s “most unique luxury play date is on the horizon.” The resort plans to open sometime in 2020.

What Happened to the Original Property?

Of course, not every family can or would want to travel abroad to a luxury all-inclusive. That has naturally led some to wonder about the concept that replaced the original Nick Hotel. Fortunately for them, the Holiday Inn Resort Orlando Suites – Waterpark Hotel remains an engaging option.

The property still contains 777 rooms, which would be considered oversized on the whole. You’ll still find the water park, the entertainment complex, the marketplace and other familiar activities. You just won’t find anything related to Nickelodeon. Those hoping for a connection with the neon-colored channel will end up disappointed. But families looking for a reasonably priced resort with plenty of amenities might end up pleasantly surprised.

Universally Loved Mouse ears may be the first thing on your Florida theme park radar, but Universal Studios is a fierce competitor for that spot. Many theme...

There are so many fun things to do in Chicago with kids that you might have to visit for a couple weeks to fit it all in!

Universally Loved Mouse ears may be the first thing on your Florida theme park radar, but Universal Studios is a fierce competitor for that spot. Many theme...

There are so many fun things to do in Chicago with kids that you might have to visit for a couple weeks to fit it all in!