The stores downtown are decked with boughs of holly, carols are jingling on the radio and sparkling trees are starting to pop up in everyone’s living room. It’s the Christmas season, which means that you may be flying to visit friends, family and relatives to celebrate.

Whether you’re traveling domestically or internationally this Christmas, there are certain challenges to flying at this time of year. Here are some important things you need to know if you are flying on Christmas Day.

Your Flight Might be Quieter, but Probably Not Cheaper

Christmas Day is not necessarily a cheap day to travel, contrary to popular belief. In fact, it is often one of the most expensive days to fly over the festive period.

However, according to Conde Nast Traveler, you’ll face fewer crowds if you travel on Christmas Day. (Unless, of course you are flying from one of these airports that Insider names as the most congested during the holiday season.)

What About Other Travel Days Around Christmas?

According to a report from CheapAir, the cheapest Christmas flights depart on December 18 and return on December 28. So, if you can take 10 days off you will be able to get the best bargain. You might also find that it’s cheaper to fly into a nearby airport than the one in a major city (although in that case you’d need to factor in the cost of ground transport).

Although the terminal itself will be less busy, you should still allow yourself plenty of time to get through the lines at security and customs and onto your flight.

There may be heavy traffic on the roads, which you’ll have to account for as well (after all, people will still be using ground transportation to visit friends and family). If you are taking public transit to get to the airport, it will likely be running on some type of modified schedule, so make sure you are aware of this and plan ahead.

The earlier you arrive the better — this is not the time of year to miss a flight, as you’ll struggle to find another one at the last minute.

Bring Your Own Food and Entertainment

Although the airport is open, all of the shops and restaurants might not be. They are often run by outside vendors, who might decide to close on Christmas Day. So, it’s a good idea to bring some snacks with you just in case there isn’t much open at the airport. You can also call the airport to see what will be open.

The same applies to the bookstores and shops in the airport. So, bring along reading material of your own as you may not be able to buy yourself a magazine or a novel for the flight. Also, don’t forget chargers for your phone or tablet! 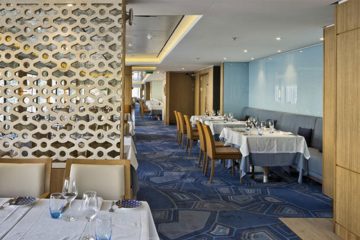 Taking a Viking Homelands cruise will grant you the opportunity to experience some of the best cuisine of Scandinavia, without ever leaving the ship.

Keep an Eye on the Weather

Check the weather in the days leading up to your flight, as this is the time of year when flight delays due to snow and rain are more common. In most cases, if your flight has to be delayed due to a big storm the airline will book you on another flight at no cost.

Most airlines will have the status of the flight on their website, so you can check on it the day or the night before. The sooner you are aware of a cancellation or a delay, the sooner you’ll be able to contact customer service.

When you are packing your carry-on luggage, think about getting through those security lines efficiently. Remember, you’ll need to remove your laptop and your liquids from your bag, so make sure that it’s easy to do so.

Most liquids will not be allowed in your carry-on luggage unless you put them in containers smaller than 3.4 ounces, stored in a quart-sized clear plastic bag. There are some exceptions, such as medicines, breast milk, etc. However, make sure you research these before you go to avoid unnecessary hold-ups.

Also, if you are bringing presents you’ll want to leave them unwrapped until you get to your destination. Otherwise, the security staff might end up undoing your beautiful wrapping job just to make sure the package isn’t suspicious. When it comes to treats like pies and cookies, you can can bring them with you but they might subject you to a more diligent inspection.

Last but not least, consider bringing an empty folded-up duffel bag to carry the gifts you will receive home with you. 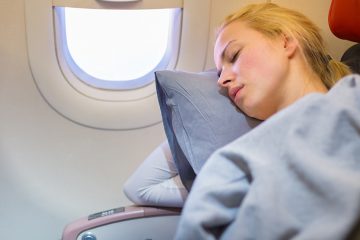 If you'll be flying overnight, these tips for how to sleep on a plane will help you get comfortable and arrive at your destination feeling well-rested.

If you'll be flying overnight, these tips for how to sleep on a plane will help you get comfortable and arrive at your destination feeling well-rested.